Journey Through Time and Space 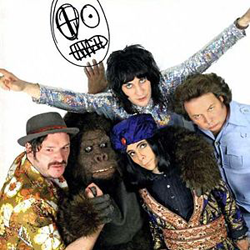 A couple of years back, I’d heard that Frank’s youngest child, Diva Zappa, had appeared in a Brit-com called The Mighty Boosh (the name alone made if worth sussing out), and then started seeing folks online on this side of the pond raving about it. My curiosity was piqued. Shortly afterwards, friends and family were asking if I’d checked the program out yet, as it would be right up my alley. This made it all the more appealing.

I’ll be up front about it: I like my comedy weird and surreal; musical references, modern or otherwise, are an added bonus. The Mighty Boosh (named after co-star Noel Fielding’s hairdo) follows the antics of the androgynous electro-boi, Vince Noir (he of the ‘do, cheekbones and mammoth Gary Numan tape collection), and his mustachioed, pseudo-intellectual, jazzbo, loser campadre, Howard Moon (c’mon, who namedrops Weather Report?). I’ll spare you the whole it’s-like-Monty-Python-on-acid-meets-blah-blah-blah and just say that it must be seen. And no, that’s not a cop-out; I just don’t have enough time to go out for drinks with all of you so that I can rave about it, throwing various scenarios and piles of quotes at you.

Starting out as a live show and radio program that moved on to the box, The Boosh has (so far) run for three series on the BBC, featuring comedians Fielding, Julian Barratt and, token American, Rich Fulcher, who lets loose some one-liners that will leave you gaping. Take a plethora of pop culture, throw in some freakish ghouls, ghosts and monsters, a talking ape and a hilarious Bryan Ferry impersonator, and you’ll be shitting yourself in anticipation that the live show will someday come to your town.

Oh, and you will need those spare underpants.